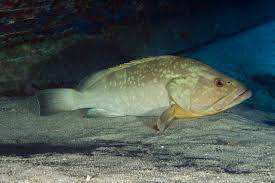 Fish species substitution and/or mislabelling is known to be a serious global issue. Spanish researchers used DNA barcoding to identify fish species in 313 samples collected in 204 mass catering outlets from 15 Spanish Autonomous Communities. The results showed that 50% of the food catering establishments sold mislabelled seafood. The fish species found to be most substituted were dusky grouper (shown left and known as Mero in Spanish) and tope shark, which were substituted by similar species of fish from Asian, South American and South African regions.