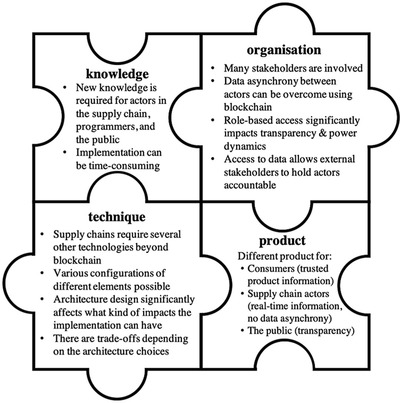 Blockchain technology is becoming increasingly used in the food supply chain to improve traceability, but the trade-offs between implementation challenges and achievable impact remain unclear. Danish researchers have undertaken a study on six cases of blockchain-based technologies in the food supply chain by applying a technology assessment framework that distinguishes between four different components of a technology: technique, knowledge, organisation, and product. The results highlight how blockchain is not a stand-alone-technology, but rather one element in a system of technologies. While blockchain-based technologies are expected to bring a variety of impacts, only some are directly attributable to the blockchain element such as increased transparency, traceability, and trust. Other impacts such as improved data management are a side-effect of digitising non-digital processes. The long-term impacts of implementing blockchain in the food chain are not yet proven, and require further study. Two fraudulent horsemeat shipments were seized in Europe last week, marking the start of an expected surge in food fraud.

The seizures have reinforced concerns among food safety experts that criminals will target food supply chains disrupted by the pandemic.

The horsemeat samples were held in the Netherlands and Denmark, with one intended for “unauthorised placing on the market,” according to the EU’s RASFF food safety register.

“You’ll see that regulators across Europe will probably now be looking at horsemeat and the labelling of it much more closely because those two cases have been identified,” said Louise Manning, professor of agri-food and supply chain security at Royal Agricultural University.

It was “unusual” to have two horsemeat seizures in as many days, she said, though it was unclear whether it was due to increased fraud activity or greater vigilance.

The risk of food crime has soared during the pandemic as the collapse of foodservice and the closure of meat processing plants has created a dramatic imbalance in supply and demand. The UK food industry has asked the government to waive aspects of competition law to allow firms to co-ordinate and direct supplies with each other after a no-deal Brexit.

The Food and Drink Federation (FDF) said it repeatedly asked ministers for clarity on a no-deal scenario.

The industry says leaving in the autumn could pose more supply problems than the original Brexit date last March.

The FDF, which represents a wide range of food companies and trade associations, said: "We asked for these reassurances at the end of last year. But we're still waiting."

The boss of one leading retailer told the BBC: "At the extreme, people like me and people from government will have to decide where lorries go to keep the food supply chain going. And in that scenario we'd have to work with competitors, and the government would have to suspend competition laws." The British Retail Consortium sends 'no deal brexit letter' to MPs at the House of Commons warning of the consequences of a 'no deal Brexit' for consumers and the food supply chain. The letter is signed by the CEOs of ten leading retailers and says that "We are extremely concerned that our customers will be among the first to experience the realities of a no deal Brexit. We anticipate significant risks to maintaining the choice, quality and durability of food that our customers have come to expect in our stores, and there will be inevitable pressure on food prices from higher transport costs, currency devaluation and tariffs.

We are therefore asking you to work with your colleagues in Parliament urgently to find a solution that avoids the shock of a no deal Brexit on 29 March and removes these risks for UK consumers."

Read more…
Blockchain has demonstrated its potential for providing greater transparency, veracity, and trust in food information so that supply chain members can act immediately, should problems arise
Read more…